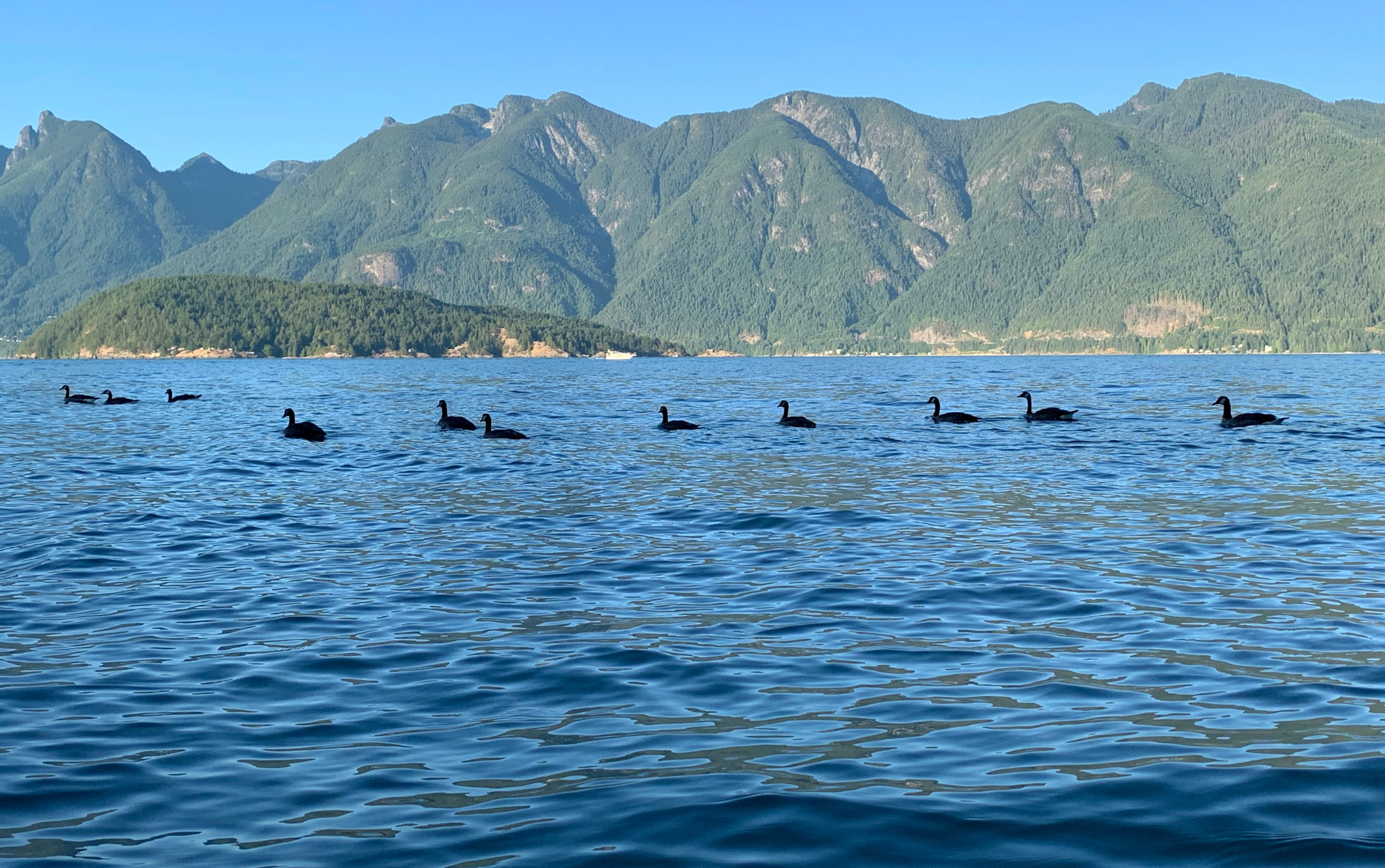 Suzanne became Executive Director for the Bowen Island Health Centre in June 2021, and is responsible for planning and implementing operations for the new Community Health Centre.

Prior to that, as a General Manager for the Fraser Health Authority, Suzanne was responsible for implementing facility and non-clinical operations in two new successive large-scale hospital projects at Surrey Memorial Hospital, the Critical Care Tower and the Outpatient Care and Surgery Centre.  Suzanne has an MBA from Sauder School of Business and is a registered CPA.

Tim Rhodes’ firms have provided services in the areas of architectural and interior design and property development including: in Calgary, interiors for the Royal Tyrrell Museum; in Vancouver, interiors for independent and international retailers; and on Bowen, log home design for builders throughout western and southwestern USA, residential design and sales support for local property developers, and currently, licenced REALTOR® services.

Colleen O’Neil is a former R.N. working in acute medicine at Vancouver General Hospital, Lion’s Gate Hospital, and as a palliative care specialist in home care on Bowen Island.

She founded and is the Program Director for the Caring Circle Health Resource Centre on Bowen Island delivering health navigation to Bowen Islanders who are having difficulty accessing information to get the health services they need. She is also the founder of Family Place on Bowen Island and has been a very active volunteer over 32 years living on the Island working at the Board level for many organizations including the Bowen Island Community Foundation, IPS Middle School, and President of her local strata board.

She has a certificate from the University of Toronto in “Fundraising for Non-Profit Organizations”.

As an international executive, working as a Chief Financial Officer based in Abu Dhabi, United Arab Emirates, Cyril’s career was exciting but demanding with constant travel and bottom-line pressures. Seeking to slow down and find a place to call home, Cyril and his family immigrated to Canada, settling in Burnaby in 2001.

After stints with UBC and SFU, he joined the BC Pharmacy Association team in 2007, eventually becoming Chief Operating Officer — a position that was the first of its kind in Association history and one he kept until his retirement in mid-2017 to care for his wife who lost her battle with cancer in 2019.

While not a resident of Bowen, he was recruited to join the Board as Treasurer, attracted by how residents and the Foundation have together to address a critical need of the community.

Bill Brown was President and CEO of BC Sugar prior to his retirement, and had been Chairman of both the Canadian Sugar Institute and the World Sugar Research Organization.

Over a 40-year period he also served as a Corporate Director, and Chair of several Audit and HR committees, with a number of public sector and private companies in the energy, forestry, and food industries.

Sandra Guarascio grew up in Victoria and after moving to Vancouver, spent years trying to find her way back to an island before she and her family found Bowen where they have lived since 2017.  Sandra is a lawyer and partner at Roper Greyell LLP where she practices all aspects of workplace law.  She has been recognized by her peers as a leading expert in labour, employment and workplace human rights law.

As a trusted and skilled advisor and advocate she works with private and public sector employers to develop and implement strategic solutions to workplace issues.  She has advised many boards and elected bodies on complex workplace and governance issues.  Sandra is a caring and strategic problem solver.

Clive Jones is a dentist who before retirement was co-owner of West Van Dental Group. The practice was home to a large number of Bowen Islanders who made the trek to West Vancouver to obtain dental care. As an advocate for Bowen Island, Clive believes having a full time dental practice on-island is essential for the community as it grows and changes.

Clive was fortunate enough to be a coach for the Bowen Football Club and was on the club’s board when the artificial turf field was built on Bowen. Clive has also been involved with the St. John’s ambulance therapy dog program.

Jennifer McGowan has been an on-and-off Bowen resident since the late 90s, and a Health Centre Foundation board member since 2018.

Jennifer currently works with the Provincial Health Services Authority as the Health Emergency Management BC Coordinator for BC Mental Health and Substance Use Services (BCMHSUS), where she is responsible for emergency management planning, training and response at BCMHSUS sites across the Province.

Jennifer has worked for the Bowen Island Municipality as the Emergency Program Coordinator, where she was responsible for project and budget management, community engagement, corporate planning and risk management. She has also worked with the Public Health Agency of Canada on pandemic planning in Yukon, and as a Paramedic with BC Ambulance on Bowen. She holds a Master of Public Health Policy and Management from the University of Alberta.

Resident on Bowen since 2010, Gordon Orlikow is a senior partner at Korn Ferry, a global human resources consulting firm, where he helps many of BC’s best-known and most progressive employers compete in a global market.

Outside of his professional life, Gordon is deeply immersed in sport with the Canadian Olympic Committee and the World Athletics Federation.

Lloyd Purdy is a practicing Family Physician with experience  in a wide range of healthcare settings in Canada , South Africa and the United Kingdom.

He is currently the Medical Director of REACH community health centre where he provides clinical leadership, and is responsible for service model development; planning; and governance of a multi-physician practice and Urgent and Primary Care Centre.

Greg Shepherd is a licensed pharmacist (UBC ’97) and CEO of Pharmasave (Western Canada), supporting over 300 independently owned community pharmacies from BC to MB. Greg brings a unique combination of practical knowledge of the BC healthcare system, from years working as a front-line pharmacist, a successful pharmacy business owner, and as an executive at Pharmasave.

As a Past President of the BC Pharmacy Association, Greg also brings experience in healthcare advocacy, working with regulators, health authorities, and various levels of government.

Brian is a Clinical and Forensic Psychologist who, in addition to providing clinical services to a variety of populations, has been an academic and executive director of large mental health services in the UK and in Canada.

More recently he was a Board member and Chair of the Vancouver Association for the Survivors of Torture, a local charity dedicated to the psychological well being of those coming to Canada under challenging circumstances.

Maija Tiesmaki is a strategist and health researcher with over a decade of experience working with funding, science and health policy organizations in BC.

She currently works at the Michael Smith Foundation for Health Research, BC’s health research funder, where she leads strategic initiatives to develop the health research talent BC needs for healthier people and communities.

Maria Turnbull, Associate Executive Director with Vantage Point, brings over 20 years of leadership experience in staff and director roles within the not-for-profit sector, both here in Canada and in the UK. With a BA in International Relations and MBA, Maria is a skilled facilitator and consultant in board governance, organizational development, and management. She has consulted for hundreds of charities, foundations, municipalities, and a range of health-sector organizations, including many of the Divisions of Family Practice across BC.

Maria and her husband moved to Bowen Island 10 years ago, where they are now raising their two school-aged children. Maria is a current volunteer team manager for the Bowen Island Football Club and former President of the Bowen Island Montessori School.

In 2007, they sold to Edelman, the world’s largest public relations company, where he continued to serve in a variety of executive roles through 2016. He is also a co-founder of Amicus.io, a software provider that helps customers of financial institutions increase the impact of their philanthropic giving. He and his wife have lived on Bowen for 23 years and have raised three boys, coaching and driving them all along the way.